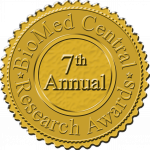 For the second consecutive year, LabArchives is pleased  to be the proud sponsor of BioMed Central’s Open Data Award.  This award recognizes researchers who have published in BioMed Central journals and have demonstrated leadership in the sharing, standardization, publication, or re-use of biomedical research data during 2012.  Earl Beutler, the President and CEO of LabArchives, LLC, will be a member of the judging committee, along with  prominent members of the Open Science and Open Data community, which includes John Wilbanks, Peter Murray-Rust, Rufus Pollock, and Cameron Neylon.

Last year’s winner of the Open Data Award, Peter AG Sandercock, University of Edinburgh, for The International Stroke Trial database Trials 2011, 12:101 (21 April 2011) says, “I was delighted to win the Open Data Award.  It sends a very positive signal to the clinical trials community that making full data sets publicly available is possible and brings benefits to the trialists.  The IST data, which was posted online has already been used for two further projects.  One is related to what happens to people who first become aware of their stroke symptoms when they wake from overnight sleep.  This was analysis undertaken by a group of researchers in the USA.  They presented the findings at a meeting of the American Stroke Association in 2012, and are now writing it up for a full publication.  Two other groups, one in Nottingham and one in Edinburgh, have used the data to try and work out better ways of using blood thinning drugs in people within the first hours of onset of stroke symptoms.  This demonstrates the value of even quite ‘old’ data to the scientific community – the IST study was published 15 years ago in 1997!.”

There’s just under two weeks left to put your nominations in for BioMed Central’s 7th Annual Research Awards, including the Open Data Award. This award recognizes researchers who have published in BioMed Central journals and have demonstrated leadership in the sharing, standardization, publication, or re-use of biomedical research data during 2012. Nominations close on January 31st 2013.

As part of its partnership with BioMed Central, LabArchives provides a special complimentary version of LabArchives to authors of BMC journal articles.  The BMC Edition provides added storage as well as templates for submission of papers to BioMed Central.  In addition, LabArchives subscribers can assign Digital Object Identifiers (DOI’s) to data sets in their Notebooks that can be linked to articles as supplemental data.

We look forward to participating in the 7th Annual awards!

Cut out arts and crafts time (literally), let your write up write itself, and allow repetitive experiments to loose that repetitiveness by streamlining your workflow with a digital lab notebook!